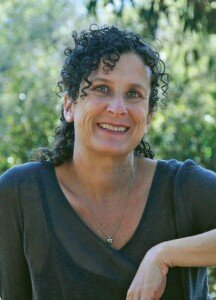 Esther Ehrlich visited Cape Cod every summer with her parents as a child, and it was this that inspired her to write Nest, her debut novel. She lives in San Francisco, USA.

Rock the Boat: What hobbies do you have that consume you completely in the same way that birdwatching does for Chirp?

Esther Ehrlich: I don’t have a hobby exactly, but I’m a big observer. I love watching everything—the squirrels leaping around the branches in our woodsy backyard; two neighbors in the road having an animated conversation; our pet rabbits, Shlomo and Sassafras, washing their faces with their paws and leaping into the air and lounging lazily in the grass while their ears periscope around, taking in every sound. I get a lot of pleasure just paying attention to what’s going on around me.

Rock the Boat: So what was it really like to grow up in the ’70s in America? Did you sing a lot of songs from HAIR and dance the cancan, like Chirp and Rachel do?

Esther Ehrlich: I definitely knew every word to every song in HAIR, although I didn’t know what all of the words meant until I was older! (As Chirp’s dad in Nest would say, not all of the words were appropriate for a young girl.)  I don’t remember dancing the cancan, but I do remember the joy of rushing into the street in my bathing suit with all of the other kids in our neighborhood in a summer rainstorm and finally, finally cooling off.

Rock the Boat: If you could choose a nickname for yourself, what would it be?

Esther Ehrlich: Hmmm…that’s a tough one. I was a camp counsellor when I was a teenager and the campers, who were about eight-years-old, decided I needed a nickname. They voted and the two top winners were “Butter” and “Poppy.” What does that say about me? I have no idea!

Rock the Boat: I know that Chirp, and Joey and Rachel are fictional characters, but do you still think about them a lot? What was it like to work with these characters for so long?

Esther Ehrlich: Chirp and Joey feel very real to me, still. They’re like very close friends who I haven’t visited in a while. I miss them. While I was writing Nest, it felt like a privilege getting to hang out with Chirp and Joey, discovering who they were, what they cared about. I loved spending time with them.

Esther Ehrlich: I loved The Secret Garden when I was young, and I still do! As an adult, the book The Bee Season moved me deeply and has stayed with me over time. I feel compassion for all of the characters, which is important to me.

Rock the Boat: What’s one thing you learned about yourself when you were writing NEST?

Esther Ehrlich: I learned that if I care about something deeply, bumps in the road don’t daunt me. I guess another way to say this is that I discovered my own capacity to be resilient.

Rock the Boat: In five words, how would you describe Cape Cod?

Rock the Boat: What were you like when you were a child? Did you always want to be a writer?

Esther Ehrlich: I spent a lot of dreamy, quiet time alone outside. I loved animals and wanted a dog so badly that I got a dog-training manual out of the library and tried to teach my pet rabbits to sit, stay, and come. I liked hanging out with my brother and two sisters, playing made-up games outside like “Stranded-on-a-Deserted-Island.” School was mostly a very positive experience for me. I liked the kids. I liked the teachers. I liked learning stuff (though I was intimidated by math, which is too bad, I think.)

No, I didn’t “always want to be a writer,” though I can’t remember a time when writing wasn’t important to me. I’ve never been a big planner, someone who had her future mapped out. I’ve just kind of followed my nose…

Rock the Boat: If Chirp was a bird, what bird would she be? And what about you?

Esther Ehrlich: I think Chirp would be a bright, curious bird, maybe some kind of finch. Me, too.

Rock the Boat: For any young writers out there–what’s your advice?

Esther Ehrlich: The best advice I can give is to listen, listen, listen to that quiet voice inside you. It knows the story you need to tell. When you’re trying too hard or not hard enough. What your characters really want… And be patient. Patience is a writer’s closest friend. 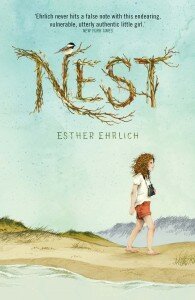 A poignant middle-grade novel about grief, the need for adventure and the healing power of friendship.